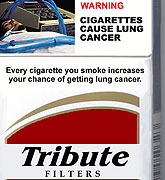 HealthDay News is reporting on the possible changes to cigarette packages under new U.S. regulations contained in the Family Smoking Prevention and Tobacco Control Act. These regulations apparently will require manufacturers to devote a large percentage of the front and back of packs of cigarettes to graphic images of the damage smoking can do to a person. Here are some excerpts from the HealthDay News article:

Would a gruesome picture of a cancer-ravaged mouth with rotting teeth make you think twice about buying a pack of cigarettes?

That’s the goal of new federal regulations expected to go into effect within three years. The rules will require tobacco companies to cover at least half of the front and back of packages with graphic — and possibly gruesome — images illustrating the dangers of smoking.

If U.S. regulations are modeled after those already in place in Canada and other countries, the warnings will be shocking: blackened lungs, gangrenous feet, bleeding brains and people breathing through tracheotomies.

Though hard to look at, the more graphic the image, the more effective in discouraging smoking, said Stanton Glantz, a professor of medicine at the University of California, San Francisco and director of the university’s Center for Tobacco Control, Research and Education.

“The graphic warnings really work,” Glantz said. “They substantially increase the likelihood someone will quit smoking. They substantially decrease the chances a kid will smoke. And they really screw up the ability of the tobacco industry to use the packaging as a marketing tool.”

Under the law, the FDA has two years to issue specifics about the new graphic warnings tobacco products will be required to carry. Tobacco companies then have 18 months to get them onto packages.

With much at stake for tobacco companies, there will be much wrangling over the details, Glantz said.

Yet research shows the FDA shouldn’t compromise, Glantz said. The more frightening the image, the greater the anti-smoking effect, he said.

Despite some research that has suggested images that are too stomach-turning may backfire because people eventually ignore them, new research is showing the most graphic images pack the most punch, said Jeremy Kees, an assistant professor of marketing at Villanova University.

In a yet-to-be published study, Kees had 541 adult smokers in the United States and Canada view a mild image of a smoker’s mouth with yellowed teeth; a moderately graphic image of a diseased mouth; and a third photo of a grotesque, disfigured mouth.

The most disturbing photo evoked the most fear, prompting more smokers to say they intended to quit, Kees said.

While the new regulations may also include no-nonsense, text warnings such as “Smoking Makes You Impotent” and “Smoking Kills,” the images will have the broadest reach, Hammond said.

Non-English speakers can understand the picture of a diseased mouth, as can people who are illiterate. Smokers tend to have lower literacy levels, Hammond noted.

And kids will get the message too, potentially stopping them from ever lighting up. “You have 4-year-olds and 5-year-olds who can understand that picture,” Hammond said.