Hinge Is Cited in Big Recall of Strollers 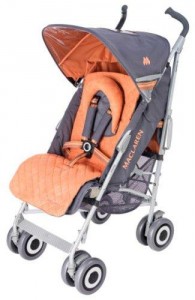 Many news outlets reported today on the recall of baby strollers. One short but comprehensive report was in the New York Times. Here are excerpts from that article.

A baby stroller company voluntarily recalled about one million strollers Monday after reports that children had had their fingertips severed in a hinge, the Consumer Product Safety Commission said.

The company, Maclaren Strollers, had received 15 reports of children placing their fingers in the hinge mechanism, resulting in 12 reports of fingertip amputation, the safety commission said.

The risk occurs when a child’s finger is placed in the hinge mechanism of a stroller while it is being unfolded and locked into place.

The locking motion can shear off tiny fingertips, the safety commission said. It was not immediately clear when the accidents were first reported.

“Consumers should immediately stop using these recalled strollers,” the safety commission advised. Parents were told that a free repair kit to cover the hinge could be obtained by contacting Maclaren.

The strollers were sold at Babies “R” Us, Target and other retailers in the United States from 1999 to November 2009. The strollers were distributed by Maclaren USA, Inc., of South Norwalk, Conn., and were manufactured in China.