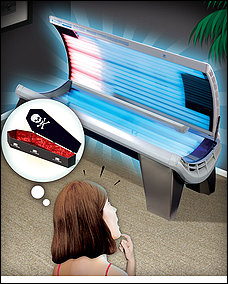 I continue my rant against tanning beds. I think these things are dangerous, and I’m frustrated that my friends and employees continue to use them.

Here are excerpts from an article in the Washington Post about tanning salons:

The Food and Drug Administration called its March 25 hearing in the wake of a report by the International Agency for Research on Cancer, part of the World Health Organization. That report, which covered X-rays and other devices that emit radiation, reclassified tanning beds into the highest cancer risk category — “carcinogenic to humans,” along with substances such as tobacco smoke and asbestos. Previously, WHO had classified tanning lamps as “probably” carcinogenic.

The report, published in the journal Lancet Oncology last summer, said that the risk of melanoma increases by 75 percent when use of tanning beds starts before age 30.

Since the mid-1980s, the FDA has regulated tanning beds as Class I medical devices, putting them in the same low-risk category as bandages and tongue depressors. At the hearing, most of the presenters asked the advisory panel to recommend that the FDA either ban the machines outright or at least more strictly regulate their use, especially by minors.

In the end, the panel urged the FDA to make tanning beds Class II or III devices, which would allow the FDA to regulate them more closely. It also recommended that more prominent warning labels be required. (The $5 billion tanning industry is also facing a new 10 percent tax on tanning-bed fees starting July 1, a component of the new health-care legislation.)

Melanoma is the deadliest form of skin cancer, and the CDC estimates that 65 to 90 percent of those tumors are caused by exposure to ultraviolet light or sunlight. Like the sun, tanning beds produce UVA and UVB rays, as well as Vitamin D. Most tanning beds emit about 95 percent UVA rays, which penetrate deep into the skin and give that bronzed look that many people find attractive, and 5 percent UVB rays, which hit the top layers and are most responsible for sunburns. According to the WHO, tanning beds are many times stronger than the midday summer sun in most countries and are therefore more dangerous.