The Danger of Blind Zones Outside Your Vehicle 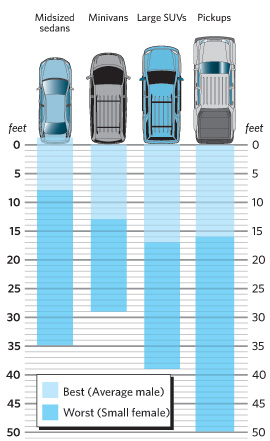 I’ve written several times about the benefits of rearview backup cameras in cars. They are great safety features, and highly recommended. Without a camera, drivers must turn and rely on what they can see out the rear window. Unfortunately, the driver can never see all the way down to the street level at the immediate rear of the vehicle. The “blind zone” is the distance between the vehicle itself and the spot where the driver can see the pavement. Naturally this varies from vehicle to vehicle.

A recent article in Consumer Reports detailed some of the issues with blind zones, and listed the vehicles with the biggest problems with rear visibility. Visit the full article for a complete list of vehicle blind zones. Here are excerpts:

Every year, children are injured and killed because drivers (in 70% of cases, parents and relatives) don’t see them while backing up. According to Kids and Cars, a nonprofit group that works to improve child safety around cars, at least 50 children are backed over every week in the U.S. Forty-eight are treated in hospital emergency rooms and at least 2 children die.

A contributing factor is that larger vehicles (SUVs, pickups, and minivans), which have become increasingly popular, have larger blind zones than passenger cars. A blind zone is the area behind a vehicle that a person can’t see from the driver’s seat.

To help consumers understand how large some blind zones are, Consumer Reports has measured the blind zones of a number of popular models. The results for both an average-height driver (5 feet 8 inches) and a shorter driver (5 feet 1 inch) are listed in the accompanying charts.

To measure the blind zones, a 28-inch traffic cone was positioned behind the vehicle at the point where the driver could just see its top. As the illustration shows, longer and taller vehicles tend to have significantly larger blind zones. (The shading shows the length of each blind zone; lighter for an average-height driver, darker for a shorter driver.)

Your best defense against backover accidents is to get out of your vehicle and check behind it just before you back up. If kids are nearby, make sure you can see them while backing up.

This chart shows the length of the blind zone of each listed vehicle. The distance noted is how far behind the vehicle a 28-inch traffic cone had to be before the person, sitting in the driver’s seat, could see its top by looking through the rear window.