From Welfare Queens to Disabled Deadbeats

The Social Security disability system is under attack from certain politicians. They seem to think disability payments are being made to the undeserving, and that this would be a good area in which to reduce federal government expenses.

Columnist Paul Krugman recently wrote on this topic. Here is a brief excerpt from his article in the New York Times:

If you want to understand the trouble Republicans are in, one good place to start is with the obsession the right has lately developed with the rising disability rolls. The growing number of Americans receiving disability payments has, for many on the right, become a symbol of our economic and moral decay; we’re becoming a nation of malingerers.

As Jared Bernstein points out, there’s a factual problem here: a large part of the rise in the disability rolls reflects simple demographics, because aging baby boomers are a lot more likely to have real ailments than those same workers did when they were in their 20s and 30s. The Social Security Administration does a formal adjustment for this reality, and as Jared says, it looks like this: 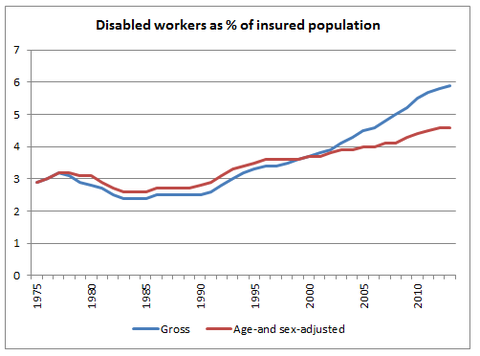 It looks a lot less dramatic, doesn’t it?