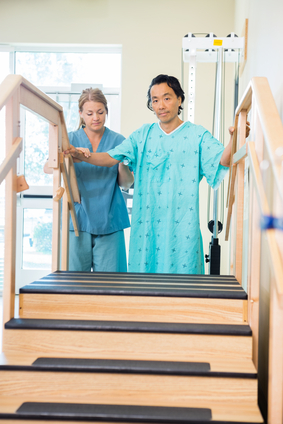 The most common nervous system-related cause of physical disability is stroke. Of those who survive a stroke, half of them will still be coping with some sort of disability six months down the road, having to adapt and strengthen limited speed, perception and judgment. As a rehabilitation mechanism, video games have become a useful, therapeutic tool. With the emergence of motion sensor technology, like the Kinect, an add-on to the Xbox One, post-stroke rehabilitation just advanced to a whole new level.

Just as its name points out, motion sensor technology is able to read and compute moving subjects using an invisible light source that illuminates those subjects. That data is fed into a sensor chip that measures the distance light travels to each pixel within the chip. With the use of unique embedded imaging software, this technology can perceive and identify objects in real time and the end-user device reacts appropriately.

Three parts make up Xbox’s motion sensor technology — an RGB color VGA video camera, a multi-array microphone and a depth sensor. The camera picks up red, green and blue color components as well as facial and body-type features. Its pixel resolution of 640 x 480 at a frame rate of 30 fps helps with a subject’s recognition. The depth sensor helps create 3D imagery throughout the room and measures the distance of each point of a player’s shape with the use of near-infrared light that measures its “time of flight” once it reflects off the objects. As for the microphone, there is actually an array of four microphones that pinpoint voices from players and other background noise, which allows a player to use his voice as another control feature.

All of this allows a player to become part of the game without the use of hand controllers. This technology has catapulted beyond just the enjoyment of video games, and has now been incorporated into robotic advancement, exploring dangerous areas on Earth, and recovery and rehabilitation from certain medical issues.

In an effort to help stroke victims to improve hand joint movement faster, the University of Southampton in England, in a collaborative effort with Roke Manor Research, has developed an algorithm that captures data while patients follow exercises on a TV screen, which can help them recover faster. The rehab aid for stroke patients tracks and measures hand joint angles, tracking as finely as the movement of individual fingers, ultimately providing more and better data for therapists to improve the monitoring process of their stroke patients.

Developers say that through the use of Xbox Kinect’s motion sensor system, patients can be stimulated more in rehab versus the often-demotivating and repetitive traditional at-home exercises. The praise of this program is also how inexpensive it is to incorporate into a rehabilitation program for a patient. The university’s goal is to create many video games to continue engaging patients’ interest in rehab in helping them reach their goals. By setting up games with high scores, a patient can aim to beat those high scores as their joint movements improve.

Stroke victims aren’t the only disabled people benefiting from motion sensor technology. Since 2010, developers in China have been working on an ingenious way to help those who are deaf (or hard of hearing) who are unfamiliar with sign language or struggle to communicate. The Kinect Sign Language Translator is a prototype system that can absorb and transmit sign language gestures and convert them into written or spoken language and vice versa.

With the combination of Xbox Kinect’s motion sensor technology and Kinect Sign Language Translator, the gap between the hearing and non-hearing will shrink tremendously, providing many more opportunities for the deaf to be fully independent. It only made sense to take a technology that can record and compute physical motion and convert it to actual, usable data beyond just playing hand-controller-free video games. This combined technology has the potential to open more doors (and jobs) for the deaf.

This article is from Ryan “Scoop” Schlehuber, a features editor for a daily newspaper who strives to avoid being one thing in his life: one-dimensional. Never one to settle, “Scoop,” as he’s known to his friends and followers, always looks to learn or try something new or hone a new skill and always looks forward to meeting new people. He has more than 13 years of writing experience, having started his journalistic career in the Upper Peninsula of Michigan and now enjoys working and living in the West Michigan area. Follow him at The Daily News (Greenville, Mich.) at thedailynews.cc.