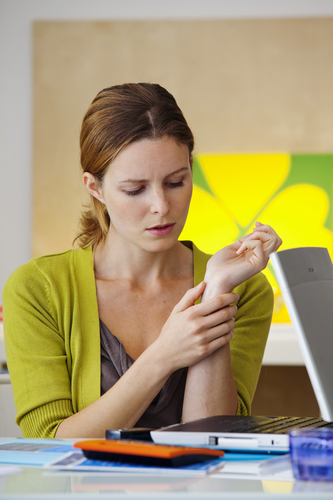 As technology becomes more and more a part of our lives, the positive and negative effects it has on our bodies and minds become more pronounced. The smartwatch that constantly sends you notifications gives you a pounding headache if you stare at it too long. The web browser that instantly provides a list of the top tropical vacation spots becomes a reason never to leave the house.

It’s hard to understate the ways technology has improved our lives, but as with all things, there’s a trade off. In recent years, a new crop of ailments have appeared whose cause can be tied directly to technology. But here’s the irony: The same technology that causes a health problem can often be its cure. You just have to know what to look for. The following are just a few common tech-related ailments and a few ways you can use technology to overcome them:

Back when personal computers were first hitting the market, reports started to appear warning against the effects of carpal tunnel syndrome. CTS is a specific kind of tendinitis that affects the hands and wrists and is caused by overuse and abnormal posture. Personal computer keyboards were a primary offender. The first generations of keyboards were not designed to ergonomically support human hands. They were bulky, flat devices with heavy keys that you really had to push down on when you typed. This led to pain, numbness and tingling in the hands of frequent computer users.

Slowly but surely, PC makers and third-party companies, like Logitech, began to rethink the keyboard, which took on a variety of curved and angled designs that catered to ours hands’ natural position. Keyboard-induced CTS hasn’t been completely eradicated, but the ergonomic redesign means you can now find relief by simply taking a break and having a stretch, as opposed to needing surgery.

Smartphones have found themselves in much the same position that keyboards were in 20 years ago. As consumers leave their desktops behind in favor of smartphones, complaints of the fittingly named “text claw” have increased dramatically. Text claw is caused by the awkward hand position required to interact with a small touchscreen. As Medical Daily points out, the jury is still out on whether or not text claw is a form of carpal tunnel syndrome, but its symptoms are nearly identical.

Only recently have smartphone manufacturers started to design phones that take user comfort into account. Since the keyboard on a smartphone is also the screen, there are certain limitations to how you can change its basic design. However, smartphones like the Samsung Galaxy S6 Edge have incorporated clever tweaks, like a curved screen that more naturally cradles the hand. The Edge also wraps the screen around the side bezel so your thumb doesn’t have to strain to perform common tasks.

Perhaps the most common ailment caused by technology is eyestrain. This is actually a family of ailments that includes headaches, dry eyes and blurred vision. Certainly, anyone who has sat at a computer for an extended period of time has experienced some combination of these symptoms. There’s a common misconception that small screens lead to more severe eye strain, but it’s actually caused by low-light, low-resolution displays that force the eye to work harder.

Computer and smartphone displays have naturally improved over time, making it easier to avoid eyestrain all together. Nevertheless, eyeglass makers like Gunnar have designed lenses specially made for avid gamers and computer programmers who want to avoid a migraine after an all-nighter.