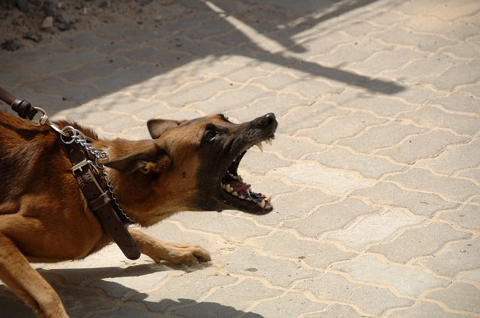 Dogs are considered to be man’s best friends. However, they can be unpredictable and bite.

According to aafp.org, “almost one half of all dog bites involve an animal owned by the victim’s family or neighbors.”

If the numbers provided by Centers for Disease Control and Prevention are to be believed, approximately 4.5 million dog bites occur each year in the United States; and almost 1 out of 5 bites become infected. Further, children between the ages 5 and 9 seem to be most vulnerable to becoming victims of dog bites.

There’s no doubt that getting tangled in a dog-bite lawsuit would be the worst nightmare of every responsible dog owner. You may want to contact a skilled personal injury lawyer, in case that happens.

By knowing about the common triggers that provoke dogs into biting people, you can save yourself from such a situation. Here are a few reasons why dogs bite:

Of course, you can train and socialize your mutt to prevent it from attacking and/or biting others. However, what do you do to keep yourself and your loved ones safe from other unstable pooches?

Mentioned here are a few tips on how you can prevent dogs from wreaking havoc in your and your child’s life.

At the time of choosing a dog to bring home as a family pet, pick one with a pleasant disposition. Such a dog is less likely to bite as he will tend to be less irritable and more playful. A dog with a good temperament will also get along better with children. Further, he will be easy to train and socialize, which means your neighbors will have fewer reasons to complain.

It is best to avoid going close to a dog that you don’t know. If you want to familiarize yourself or your child with a dog before you buy it, ask the store owner for permission before trying to play with it. If the owner permits it, approach the dog gently, without making quick movements. Walk towards it slowly and quietly. The dog will, at this point, most likely sniff you. Let him do that and thereafter, you can pat his back gently.

Ensure that you never leave your child alone with a dog, especially an unfamiliar one.

When it comes to unfamiliar dogs, do not try to approach or play with one that is feeding her puppies. In fact, stay as far away from it as you possibly can. Further, watch out for indications that the dog may be angry and ready to attack by observing its body language. These indicators include raised ears, fur standing on end, tail straight up, bared and gnawing teeth, howling, and staring incessantly at anyone who approaches him.

Whenever you approach a dog, do so slowly, and give the dog the chance to come towards you, if possible. It is important that you move gently around a dog so as to avoid startling (and upsetting) it.

Do not tease a dog as doing so can anger and/or frustrate it, causing it to bite. Additionally, keep your fingers together when feeding a dog with your hand so that it doesn’t confuse it with a treat and bite into it as well.

By spaying your pooch, you will not only allow it to enjoy the health benefits, but you will also get it to behave better, which will reduce the likelihood of bites. When spayed or neutered, female dogs do not go into heat and male dogs are less likely to wander away from home in search of a mate. Further, he will also be less inclined to mark his territory by urinating in your house, and or mount other dogs, people or objects. Spaying reduces aggression to a great extent in dogs.

Stop walking and stand still with your hands at your side if you see a stray dog approaching you. Teach this to your child as well. If your kid is playing on the ground, he/she should curl into a ball with his/her head tucked in the hands over the ears and neck.

Never make the mistake of screaming or running from a dog as that will only make the dog more suspicious of you. If the dog becomes aggressive, try and keep your calm. Do not make eye contact with it. When it loses interest, it will move away, and you and/or your child can also slowly back away from it until it is out of sight.

Dogs can be extremely adorable. Often, they co-exist peacefully with human beings in their homes and several studies link them to decreased level of stress and anxiety. However, their behavior can become erratic leading them to bite and cause injury and pain. Worst of all, their bites can become infected, which can prove to be fatal for the victim. This, however, does not mean that having dogs as pets is a bad idea. Pay heed to the above tips and you should be able to have a pooch that is healthy and stable, thereby reducing the likelihood of him attacking and injuring people.

Author Bio: Rachel Oliver is a thought leader in laws dealing with personal injury and related niches. Updated with the latest happenings in the legal world, she shares her experiences and anecdotes through her write-ups on various websites. Interact with her through her Google+ profile.