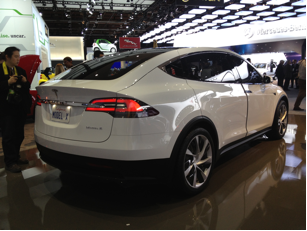 Fox News the California Highway Patrol said officers noticed a “Tesla Model S cruising along U.S. 101 in Redwood City at 3:37 a.m. with what appeared to be a dozing driver behind the wheel.” The officers trailed “the sedan for about seven miles trying to get” the driver “to respond to lights and sirens.” The officers reckoned the vehicle’s “semi-autonomous Autopilot driver assist system was engaged, so they pulled in front of it and started to slow down, according to a police report.” Fox News says the Tesla “did the same, and the two vehicles safely came to a complete stop in the middle of the highway.” The officers “roused the driver, who was identified as Los Altos Planning Commission chair Alexander Samek, and drove him and the Tesla to a nearby gas station where he failed a field sobriety test.”

In continuing coverage, the AP reports a Tesla Model S’ autopilot system “may have helped the California Highway Patrol stop the car after its driver fell asleep on a freeway.” California Highway Patrol officers noticed a driver sleeping on Friday as they were searching for intoxicated motorists. The officers “alongside the gray Model S on U.S. 101 and saw that the driver was asleep.” According to CHP Spokesman Officer Art Montiel, after the driver was unresponsive to the officer’s siren and lights, the officers slowed traffic following him and attempted to determine as to whether the Tesla’s systems for driver assistance were activated. The officers proceeded to drive in front of the Tesla and reduced their speed, and the Tesla subsequently came to a stop. The AP story also featured “answers to questions about how the systems work and the incident” itself.

ABC News reports that the officers pursued the Tesla for seven miles on Highway 101 while the driver was asleep, according to police. ABC News says “what is befuddling transportation analysts and Tesla watchers is that the chase could even go on for that long.” Tesla’s “Autopilot” needs, according to ABC News, “a driver to touch the steering wheel every minute, or the system alerts the driver and gradually brings the car to a stop.” Pundits say in this scenario, autopilot might not have been functioning or the motorist undermined it. Elon Musk said on Twitter, “Default Autopilot behavior, if there’s no driver input, is to slow gradually to a stop & turn on hazard lights. Tesla service then contacts the owner. Looking into what happened here.”

KNBC-TV Los Angeles reports, according to the California Highway Patrol, officers noticed the vehicle at close to 3:30 am. The AP says that the driver, Alexander Samek of Los Altos, was woken up “and arrested on suspicion of driving under the influence.” It is uncertain if Samek has a lawyer.